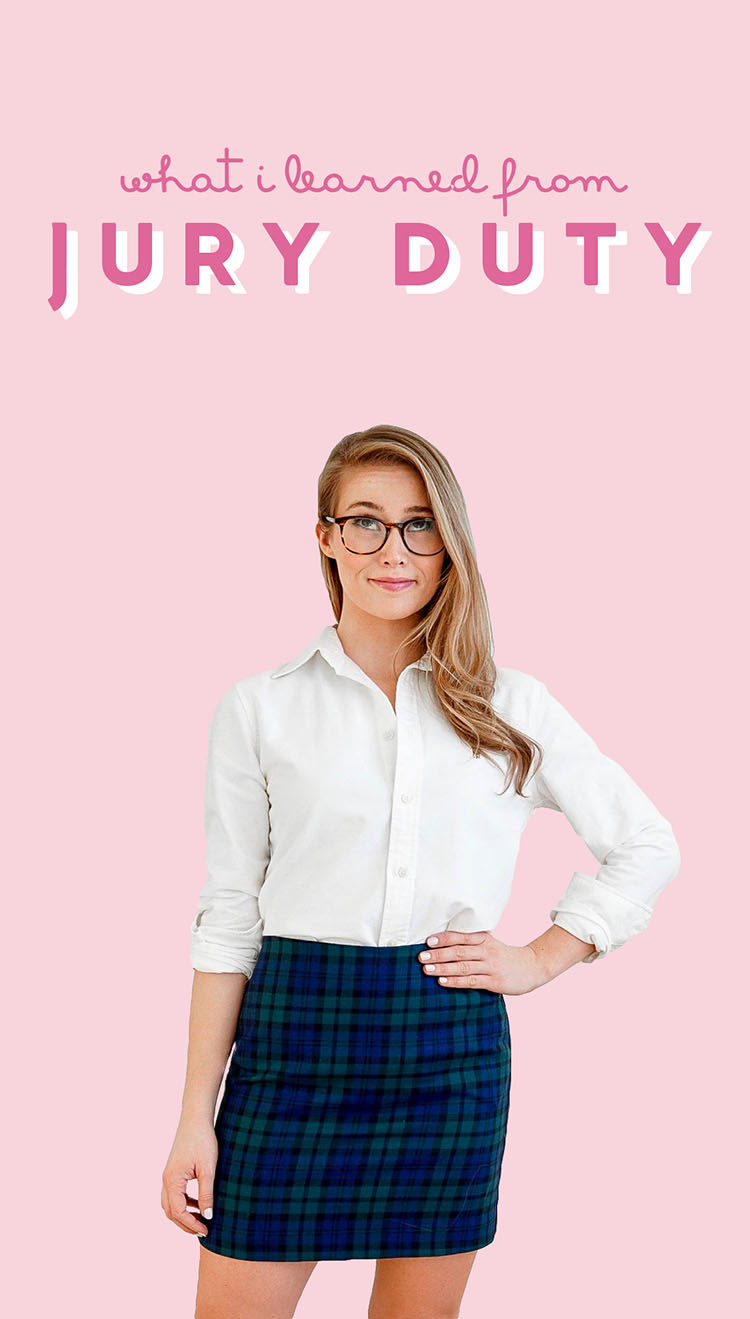 This week, I got called in for that one event everyone loves to hate… jury duty.

No, I’d never been called into jury services before but oh boy I had heard about it. You know what I’m talking about… the grumblings and eye rolls from friends and family members who had received that one, unwelcome letter. Those grumblings and eyerolls that made one stop and think “Wait, is it really that bad?” I knew it was coming eventually, but let me assure you, “jury duty” was a phrase way off of my radar.

Until it was very much on my radar. And, therefore, on my schedule for this past Tuesday.

Let me tell you… it was a learning experience to say the very least. I’m sure you’ve heard in general terms what it’s like, what to expect, how to get out of it, etc, but I really had no real grasp on what I was walking into that Tuesday morning. So for today’s post, I’m going to walk you through what I learned while on… drumroll please… jury duty. Read on for my tips on what to expect, how to be best prepared, and a runthrough of my day and experience!

Before we get started, I want to clarify that I was not selected to serve in an actual trial. Rest assured, I will not be sharing any sensitive information here. I also want to state that I served jury duty at the Dallas Criminal Courthouse, so this experience is tailored to that courthouse in particular and may not be relevant for other courthouses.

1. Make No Plans That Day

For whatever reason, I had it in my head that I would sit around for a couple of hours and then be released. In fact, I had planned a few things for that afternoon thinking I’d have plenty of time to get them done!

While it is true that some people get released early-on, I was not one of those lucky few. I ended up being there until 4:30 in the afternoon. A full day, indeed!

As a life-long rule-follower, I  worried I’d get arrested if I showed up five seconds after being told to. (Doesn’t “jury duty” just have that feel?) But after hitting traffic and arriving 30-45 minutes after I was supposed to get there, I realized that the process is a lot less intimidating than one would think.

Even after showing up late, I ended up waiting for another hour before anything important started happening. The people around me were complaining that they had been waiting forever! So in the end, I was thankful I had a few extra quiet moments to myself that morning. No one cared or even noticed that I was late. (And I survived the incident without ending up in handcuffs.)

Here’s a fact about jury selection I wasn’t aware of: lawyers don’t really “pick” a jury. Rather, both sides are given 10 strikes each, and with those strikes, their goal is to remove individuals they perceive to have a bias against their client. So during the “voire dire” process (the time given to the attorneys to speak with the jury) the attorneys are trying to get to know the jury so they can decide who to “strike.” And you know who they end up striking? The people who speak up and have a bias.

Now, I’m not saying that you should make up a bias to get out of being selected for the jury. Don’t do that. In fact, you take an oath to tell the truth before you go into the courtroom. (Duh!) What I am saying is that you should absolutely speak up and make your opinion known. This allows both sides to get to know you, and if you are vocal and strong about a certain opinion, odds are one side won’t like it and will strike you.

This was absolutely the case in my personal experience. The 12 jurors (and 1 alternate) who ended up being selected out of our whole group were the individuals who had stayed quiet during the voire dire process. It was amazing how true it actually rang.

A Runthrough of My Day

If you’ve made it this far, I commend you! Before signing off, I thought I’d share a brief runthrough of my day on the off-chance that it might help one of you know what to expect!

Like I said above, I arrived at the room specified about 45 minutes after the specified time. I had packed one of my Barrington Totes all the way to the brim with books, snacks, water bottles and such and felt like such a soccer mom. Ha!

I was surprised to see a pretty large room filled with seats – and most of them were full! Someone behind me grumbled that they had been waiting around for an hour without anything happening. (Pat on the back for myself for showing up late.) We must have waited around for at least another 30-45 minutes before a woman at the front addressed us with a mic. She gave us a quick overview of what doing jury service entails and went on to inform us that whenever a proceeding upstairs decided to move forward with a jury trial, she would call up a “panel” for them.

Like I said above, a jury panel is a group potential jurors that are assigned to a particular trial. As fate would have it, she called numbers 1-184 first. Want to know what number I was? 183. You just have to laugh, ya know?

Once she called this group of numbers, she instructed us to go upstairs to a specified courtroom. Once there, we spent more time waiting around. (Are you seeing a theme here?) Finally, two women walked out with clipboards and passed out questionnaires. (I learned that each case has a different questionnaire the lawyers on both sides put together.) Our group’s questionnaire contained a lot of questions about how we felt about the police force, if we watched crime shows and if we felt like that gave us a bias towards prosecutors or defendants, etc. It was actually pretty interesting.

Another thing I wasn’t expecting? The citizen accused was standing with the lawyers, facing us as we walked in, as well.

I was juror #76 out of #77, and the way the seating in the room worked was that I sat up in the actual juror box with the last twelve potential jurors. I ended up being grateful for these – we had really comfortable chairs compared to the benches the other jurors had to sit on!

After everyone had filed in, the bailiff introduced the judge. The judge assigned to our case seemed professional and kind, and made us all feel at ease. She took some time explaining what type of case we were there for, and went on to reveal the incredibly serious accusation being tried. For some reason, I didn’t actually think that I had the chance of being a juror on something so serious. Finding out the opposite shook me up a bit if I’m being honest. Such a surreal moment.

After this general opener, she asked us jurors some general questions, like “Should this trial go on through Friday, do any of you have flights or important items scheduled that you cannot miss?” A few people raised their hands for surgeries, work trips, etc, and I swear to you someone made up that they had a child. MADE UP THAT THEY HAD A CHILD, Y’ALL. I know that sounds harsh, but when the judge followed up to ask how old the man’s son was, he responded (and I kid you not): “Uhhh… about, um… like, twelve months?”

She let us off for a lunch break, and instructed us to be back for “voire dire” in an hour and fifteen minutes. I took my huge bag and myself downstairs to a random bench, and proceeded to make a quick lunch out of the peanut butter and other snacks I had brought along. Surprisingly, the lunch hour flew by and by 1:30 we were all back to the courtroom.

This is when things started to get interesting. We were called back in, and the “voire dire” process began. Like I explained above, this is when the lawyer(s) from both sides get an hour each to talk to the jury, ask us questions, explain things about the law, etc. Oftentimes, they would present us with a hypothetical situation and say “Let’s see… juror #76, Mrs. Ma’am, what do you think about that?” Mrs. Ma’am (name made up) would respond, and the lawyer would turn to another juror and say “Mr. Sir, what do you think about what Mrs. Ma’am said?” and so on and so forth. You got a feel for different personalities pretty quickly.

It was also during this part of the day that I learned I had a very small chance of making it on the actual jury. Like I explained above, the lawyers don’t really get to “pick” who is on their jury. Rather, they can pick 10 people each they don’t want to be on the jury. After they make those cuts and the judge removes anyone who has a legitimate excuse (flights, surgeries, etc.) the remaining 12 individuals left (in order) make up the jury.

After both sides finished their voire dire, we were instructed to wait in the hall for them to make their decisions. Another hour went by, and we were all ushered back into the courtroom. Again, both lawyers and the citizen accused were standing and facing us as we walked in.

It was a pretty nervewracking experience, and you could feel the tension in the room. The judge proceeded, one by one, to name the twelve individuals who would serve on this case. After she called the thirteenth name (the alternate) I was finally able to exhale. Everyone, collectively, took a breath. The worst was behind us. We didn’t get picked.

As I walked out of the courtroom and to the parking lot (it was about 4:30 at this point) I was filled with a somber gratitude for the twelve individuals who had been selected for the jury. It was a serious case with a serious punishment should a verdict of “guilty” be reached, and the weight of that would be substantial.

I also walked away with a sense of sadness as the reality of the evil that’s in the world set in. My day-to-day for as long as I can remember has been safe, secure, and, right or wrong, shielded from so much of the hurt and darkness that exists. It was a strange and eye-opening experience to realize that “shielding” is not the reality for many of the people in my city, let alone country.

I’m thankful to have it behind me for now, and thankful for the perspective it brought to my heart and mind.

I know it was a long one, and certainly a different type of post from my day-to-day, but I hope it helps you in some way.. whether jury duty is on your horizon or not. Thanks for reading!